skip to main | skip to sidebar

Flooding (as opposed to editing)

So, I was up at the Red River helping out, so I ended up not really doing anything film wise - however, people keep asking me about it, so I decided to tell everyone at once here. 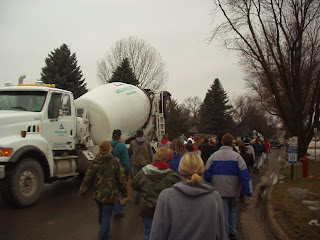 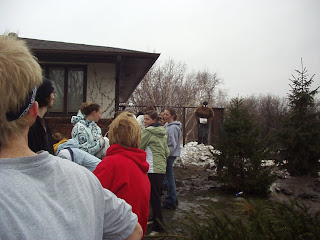 Monday - I get back to moorhead, visit my campus sports center, sign a release form and a time sheet jumped on a bus with my DP, and headed out. There were many heavy vehicles in the streets, dropping off sand, and picking it up from people who were bagging it, and taking it to yards that were being sandbagged. We worked at a house to the left of the point south of I94 here. Basically we passed tons of 10-30lb sand bags down a line over a muddy yard to a dike behind a house. It was very very muddy. I had boots on, and that made it lots of fun. 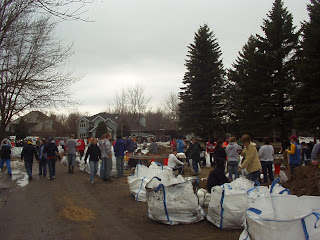 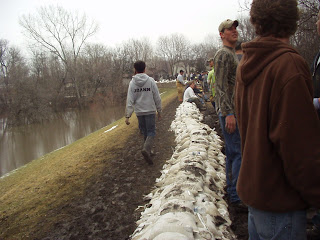 Tuesday - helped on the Horn park dike for most of the day to raise the level above 42', and then helped out in a neighborhood that's been evacuated. I worked with some people from Wisconsin among other places. On Tuesday, we had bags for sandbag transportation, and that was probably faster. We didn't tie sandbags, because that wasn't needed for them to stop the river. After the walls were built up high enough, they were covered with plastic, and that was pinned down with more bags. National guardsman, firefighters, and police were all over the place trying to keep things coordinated. I rode back to campus in a van and learned that school was closed Wednesday as well. 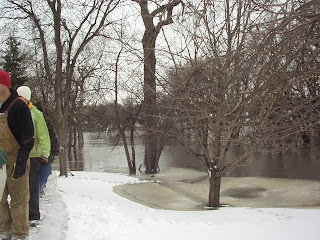 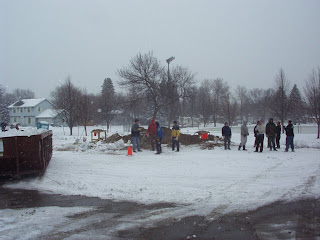 Wednesday - It was snowing and very cold (10-20ºF), but I helped bag sand, load it onto residents vehicles, loaded some city dumpsters, and helped build a dike around an elderly gentleman's house. Then I helped load more sand. 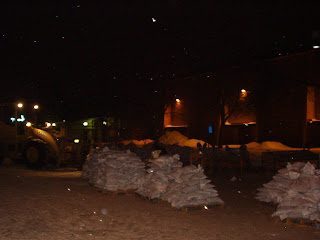 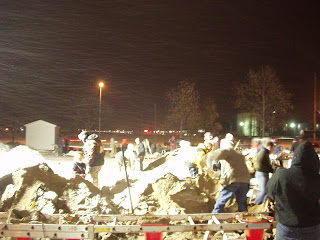 Thursday - I wanted to take a break because my wrist wasn't in poor condition from a 6 hour sandbag blitz on Tuesday, and it hadn't been fun Wednesday, but I ended up bagging sand from 9-midnight at Moorhead Technical College, and in the road by the Nemzek Sports center. It was pretty snowy. I opened bags, held bags under cut off constuction cones to be filled with sand, and put bags on pallets for bobcats to load into SemiTrailers. Sand was freezing, and so was I. It was fun though. I gave about 90GB of movie footage to my editor on a portable hard drive, beginning the epic editing process!
(no pictures )

Friday - Got a knock on my door at 9:33am and was told that Residents at Moorhead State University were being asked to leave. I hit the road around 11:30am with my AC, and will be working on spaceships for a Christian Summer camp Video in the Twin Cities this weekend. School opens Tuesday or later depending on the chaos level in the city. We also played a sweet game with Legos before my final car to the cities arrived. He won, but it was a close game.

Saturday - It's not Saturday yet. I'll eat homemade blueberry pancakes for breakfast.
Posted by Paul at 6:58 PM